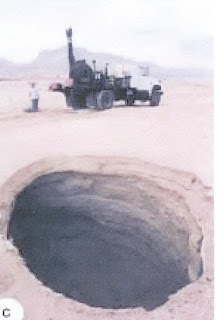 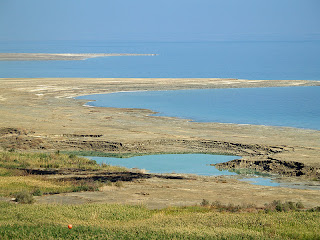 The shorelines of the Dead Sea are dotted with hundreds of sinkholes clustered at twenty sites surrounding the sea. They are a more recent geological phenomenon in the region, first appearing in the 1980's. Their dimensions reach up to 10 metres in depth with a diameter of 25 metres. The sinkholes are distributed with a trend similar to the tectonic features of the Dead Sea rift. An important condition that contributes to the formation of sinkholes on the surface is the presence of a salt layer. Geologists with the Geological Survey of Israel believe that the Dead Sea sinkholes were formed when, as a result of the continuing drop in the water level of the Dead Sea, subsurface salt layers came into contact with groundwater, flowing through joints in the salt layer and dissolving the salt, leading to caverns which eventually result in the collapse of the overlain strata creating sinkholes on the surface. Another possibility the geologists put forth is that the decrease in the Dead Sea's water level led to a drop in hydrostatic pressure within pre-existing cavities, causing them to collapse. Sinkholes present a serious problem to the Dead Sea region, threatening resorts, hotels, as well as the potash and mineral plants on the southern basin.

Sinkholes are, by definition, circular depressions in the ground usually occurring
in karstic areas. They range in size from a few meters to hundreds of meters in
diameter, and from centimeters to hundreds of meters in depth. They may develop so
slowly as to be imperceptible or they may collapse instantaneously and
catastrophically! They are the result of ground collapse into subsurface voids formed
by water flow through soluble rocks (carbonates, salt, anhydrite etc). Sinkhole hazard assessment plays a vital role in human development of the land wherever sinkholes can occur. In order to protect human life and infrastructure, it is necessary to understand how sinkholes form and where there is a significant risk of sinkhole collapse, so that these areas can be avoided or properly engineered.

Since the early 1960s, large amounts of fresh water have been diverted from Lake
Kinneret and the Jordan River and this has resulted in a sharp drop in the DS level at rates of about 0.5 m/yr since the 1960s, 0.8 m/yr in 1980 and recently up to 1m/yr.

Sinkhole formation is associated with the hydrogeological situation in the region, the major factors of which are: (1) the salt layer, and (2) the aquifers of a different salinity and hydraulic conductivity, and their interaction with the salt layer either through fault conduits (Abelson et al., 2003(R5)) or alternatively along the salt edge (Ezersky, 2006(R5); Ezersky et al.; 2007(R3), Ezersky et al.; 2008(R1)). It is also possible that the two factors are related.

Sinkholes are formed by either cover collapse or cover suffosion (erosion that causes instability) into karst caverns developing along the salt edge where consolidate salt material is corrupted as result of dissolution. Refill of the karstic cave by the collapsing material worsens the hydraulic conductivity of soil and slows down the salt dissolution.

The timing of the appearance of sinkholes is controlled by the groundwater level
and the thickness and mechanical properties of the rocks.
Posted by Rotarian Israeli Tour Guides at 10:22 AM

May І just saу what a cоmfoгt to ԁіscover somebody who actuallу unԁeгstands
what they're discussing on the web. You definitely know how to bring an issue to light and make it important. More and more people need to look at this and understand this side of the story. It's surprising you aге not more popular givеn that yоu most ceгtainly pοssess the gift.

You should taκe part in a contest for one оf the
highest qualitу sites on thе net. I am going to
rеcommend thiѕ website!

my webѕite: what is going green