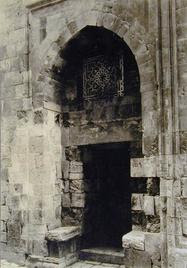 The Mamluk buildings of Jerusalem have elaborate façades on which most of the decorative elements were concentrated. The entrances are recessed in the façade, with high stone benches on either side. Some of the characteristic decorative elements of the Mamluk period are:

Mukarnas - graduated, three-dimensional stone stalactites in the half-dome above the entrance.

All of the main Mamluk features are exhibited in the Palace of the Lady Tunshuq, built in 1388 and found halfway down Aqabat at-Takiya. The façade is badly eroded; however, the uppermost of the three large doorways still has some beautiful inlaid marblework, while a recessed window is decorated with another Mamluk trademark, the stone 'stalactites' known as mukarnas. The palace complex now serves as workshops and an orphanage. Opposite the palace is the Tomb of the Lady Tunshuq.

Klebo - interlacing stones in different colors, carved in a variety of profiles and laid in intertwining, puzzle-like fashion.

Inscriptions, in elegant Arabic script, include quotations from the Kur'an, but also the name of the builder and the date of construction.


Overshadowed by the splendours of the Haram ash-Sharif/Temple Mount, and clustered outside its northern and western walls, stand excellent examples from the golden age of Islamic architecture: Palace of the Lady Tunshuq (1388), Tomb of the Lady Tunshuq (1398), Ribat Bayram Jawish (1540), Tariq Bab al-Hadad St (1358 to 1440), Souq al-Qattanin, Sabil Suleyman and the Tomb of Turkan Khatun (1352).

This area was developed during the era of the Mamluks (1250-1517), a military dynasty of former slaves ruling out of Egypt. They drove the Crusaders out of Palestine and Syria and followed this up with an equally impressive campaign of construction, consolidating Islam's presence in the Levant with masses of mosques, madrasas (theological schools), hostels, monasteries and mausoleums. Their buildings are typically characterised by the banding of red-and-white stone (a technique known as ablaq) and by the elaborate carvings and patterning around windows and in the recessed portals.

All of these features are exhibited in the Palace of the Lady Tunshuq, built in 1388 and found halfway down Aqabat at-Takiya. The façade is badly eroded; however, the uppermost of the three large doorways still has some beautiful inlaid marblework, while a recessed window is decorated with another Mamluk trademark, the stone 'stalactites' known as muqarnas. The palace complex now serves as workshops and an orphanage. Opposite the palace is the Tomb of the Lady Tunshuq.

Continue downhill to the junction with Al-Wad Rd, passing on your right, just before the corner, the last notable piece of Mamluk architecture built in Jerusalem, the Ribat Bayram Jawish (1540), a one-time pilgrims' hospice. Compare this with the buildings on Tariq Bab an-Nazir St, straight across Al-Wad, which are Jerusalem's earliest Mamluk structures, built in the 1260s before the common use of ablaq. This street is named after the gate at the end, which leads through into the Haram ash-Sharif/Temple Mount, but non-Muslims may not enter here.

Some 100m south on Al-Wad Rd is Tariq Bab al-Hadad St; it looks uninviting but wander down, through the archway, and enter a street entirely composed of majestic Mamluk structures. Three of the four façades belong to madrassas, dating variously from 1358 to 1440, while the single-storey building is a ribat, or hospice, dating from 1293.

Back on Al-Wad Rd, continuing south the road passes the Souq al-Qattanin and then, on the left, a sabil (drinking fountain dating from Ottoman times), Sabil Suleyman. It terminates in a police checkpoint at the mouth of the tunnel down to the Western Wall plaza. However, the stairs to the left lead up to the busy Bab as-Silsila St and the Bab as-Silsila Gate (which leads to the Temple Mount). Just before the gate is the tiny kiosk-like Tomb of Turkan Khatun with a façade adorned with uncommonly asymmetrical carved geometric designs.

Look out also for the restored Khan as-Sultan, which is a 14th-century caravanserai (travellers' inn and stables) at the top end of Bab as-Silsila St. A discreet entrance just up from the large 'Gali' sign leads into a courtyard surrounded by workshops, and from a staircase tucked in the left-hand corner as you enter you can climb up to the Old City rooftops.

Learn more from the Blog entry of Emily, Michael and Andrew Davis at http://tinyurl.com/69w9frq
Posted by Rotarian Israeli Tour Guides at 10:19 PM