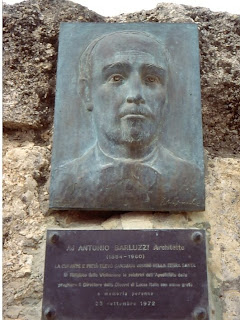 Barluzzi was born in Rome September 26, 1884. He lived with his parents and other siblings close to the Vatican. He lived the life of a simple Franciscan Monk.

Barluzzi was an Italian architect commissioned by the Franciscan order to design and build churches atop the ruins of Byzantine and Crusader ones that had been destroyed or fallen into disrepair during the Ottoman period. His work fundamentally shapes the pilgrim experience by defining how we encounter sacred space in the Holy Land. For instance, they're almost all built in the light stone of Jerusalem with an open feeling and bright lighting, and contain mosaic panels with healthy dose of blue.


He started his career as an architect spending several years working with his brother, Giulio, on building projects in the Middle East. The first project in Jerusalem was the 100 bed Italian hospital on St. Paul (now Shivtei Yisrael) Street. His first two Franciscan commissioned assignments were to build basilicas in Gethesemene and Mt. Tabor (1919).

A whole succession of works followed. For the Custodia di Terra Santa in 1924-5 he built the little church and the hospice of the Good Shepherd at Jericho. In 1928-9 he carr ies out restorations works at the Flagellation in Jerusalem; in 1933-7 in two sessions he carried out building work on Mount Calvary; in 1952-3 he built the Shrine of St. Lazarus at Bethany; in 1954 the Shine of the Shepherds near Bethlehem; still in 1954-5 the Dominus Flevit on Mount Olivet, and he restored Bethphage.


A LIST OF BUILDERS DESIGNED, BUILT OR RESTORED BY ANTONIA
BARLUZZI


In 1958 he learned that his design for a new basilica in Nazareth had been rejected. On the night when he heard this bad news he suffered a heart attack which brought on cerebral deafness and pulmonary emphysema.

Antonio Barluzzi died on the evening of December 14th, 1960

Of Barluzzi’s churches H.V. Morton wrote (Source, "In the Steps of the Master",

"They are remarkable for their originality and the variety of their design, which owe less to any architectural style or tradition than to the piety of their creator. All Barluzzi’s shrines attempt to create an emotional response to the Gospel story. For example, one should compare the majestic gloom of his basilica in the Garden of Gethsemane with the joyful little Christmas carol of a church in the Shepherds’ Fields at Bethlehem. The same contrast may be seen in his Church of the Visitation at Ain Karem and his basilica on Mount Tabor. Barluzzi will be recognised as a genius in years to come."

And Father Pacifico Gori has written of Barluzzi’s churches;

"In order to obtain the grandest, most solemn, and most moving artistic effects, care has been taken to achieve maximum simplicity of line; those profound and universal qualities have been sought that would produce maximum results with a minimum of fuss. Almost an attempt to translate into architecture the majesty and simplicity of the bible: these works have been carried out more with the heart than with science, seeking out the soul of things and cutting out the inessential."

Barluzzi wanted to achieve harmony between the old and the new, between tradition and originality in such a way that each building would emerge with characteristics appropriate to the place and to the mystery recalled there. He wanted most of all that his architecture should be a factor in awakening religious devotion that is a perennial reminder of a visit to the Holy Places.

As far as possible he lived with religious communities as a religious himself; he took part gladly in the community life; he never drew attention to himself. He never spoke of his many distinguished decorations, and he was never seen wearing them.

Antonio was above all a man of faith, of prayer, of profound interior life. He meditated at length on the Gospel so as to discover its divine secrets and to draw from it inspiration for his artistic designs.
Posted by Rotarian Israeli Tour Guides at 2:09 AM

Barluzzi died in Rome but where was he buried? I cannot find this information anywhere. THANKS. marks@gracecathedral.org