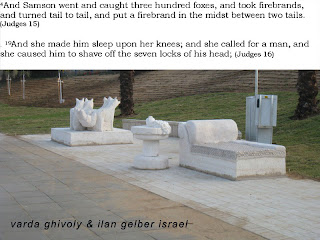 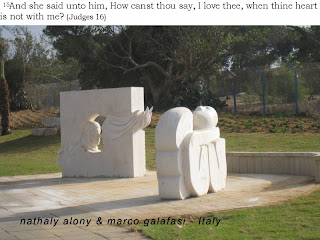 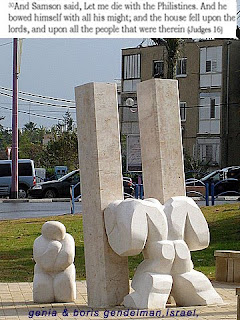 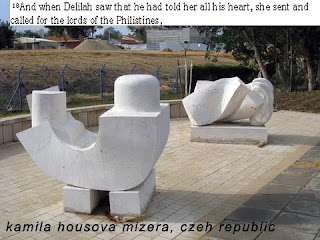 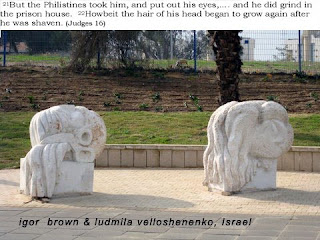 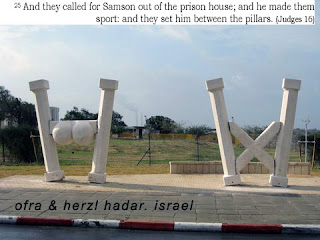 Dear friends.
You are invited to submit your proposals for International Stone Sculpture Symposium, Ashkelon "Samson and Delilah" - 7 Couples of artists creating 14 sculptures.
The sculptures are planned for a walkway (pictures enclosed)

Ashkelon website is: http://www.ashkelon.muni.il/openning_eng.asp
Samson and Delilah - Story Summary: Judges 16
When Samson fell for Delilah, a woman from the Valley of Sorek, it marked the beginning of his downfall and eventual demise. It didn't take long for the rich and powerful Philistine rulers to learn of the affair and immediately pay a visit to Delilah. You see, Samson was judge over Israel at the time and had been taking out great vengeance on the Philistines—but that's another story. Hoping to capture him, the Philistine leaders each offered Delilah a sum of money to collaborate with them in a scheme to uncover the secret of Samson's great strength.
Using her powers of seduction and deception, Delilah persistently wore down Samson with her repeated requests, until he finally divulged the crucial information. Having taken the Nazirite vow at birth, Samson had been set apart to God. As part of that vow, his hair was never to be cut. When Samson told Delilah that his strength would leave him if a razor were to be used on his head, she cunningly crafted her plan with the Philistine rulers.

While Samson slept on her lap, Delilah called in a co-conspirator to shave off the seven braids of his hair. Subdued and weak, Samson was captured.
Rather than killing him, the Philistines preferred to humiliated him by gouging out his eyes and subjecting him to hard labor in a Gaza prison. As he slaved at grinding grain, his hair began to grow, but the careless Philistines paid no attention. And in spite of his horrible failures and sins of great consequence, Samson's heart now turned to the Lord. He was humbled. He prayed to God—a first—and God answered.
During a pagan sacrificial ritual, the Philistines had gathered in Gaza to celebrate. As was their custom, they paraded their prized enemy prisoner into the temple to entertain the jeering crowds. Samson braced himself between the two central support pillars of the temple and pushed with all his might. Down came the temple, killing Samson and all of the people in it. Through his death, Samson destroyed more of his enemies in this one sacrificial act, than he had previously killed in all the battles of his life.

During the rule of the Judges, Samson, the hero, went to Ashkelon and slew 30 men there after being deceived by a Philistine woman (Judges 14:19).

In the following years he continued to do battle with the Philistines but he also got involved in romantic affairs with several of their women.
Ashkelon is associated with the story of Samson and Delilah, and it is easy to believe that the lovely beach was one of their favorite playgrounds.

The International Stone Sculpture Symposium will take the form of a performing art event, an open sculpture studio involving participation of both artists and the public. The event will bring together couples of sculptors from various countries, who will demonstrate their process of stone sculpture creation in front of the public. The artist will be provided with Israeli limestone as a medium. It is expected that the event will produce contemporary sculptures which will be used for urban or esthetic purpose at Ashkelon

Sculptors wishing to participate in the Symposium shall include previous participation in symposia in their CV.

The invited artists will be required to submit their entries: Sketches (2-3) of the proposed sculpture.
The proposed works must be original, should represent a high artistic quality, must conform to commonly accepted practice for public art, and may not have any pornographic, obscene, discriminatory racist or hatred contents or connotation.

Sculpture design should be such which allows relocation without damage. Application must note the dimensions (height, width and perimeter) for the proposed sculpture.
Please send the application by e-mail till the 10th of July to:
Varda Ghivoly: gigv@ bezeqint.net
Posted by Rotarian Israeli Tour Guides at 9:14 AM