GUIDING POINT: (Presented at Mitzpeh Bet Eshel): Jewish responses during the latter part of the British Mandate for Palestine to White Papers issued during the Mandate 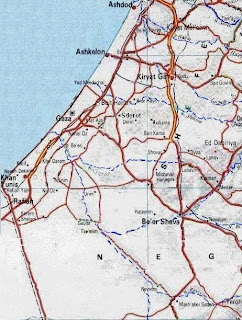 Our tour today takes us into the northern part of the Negev. We’re going to examine this area as it relates to the establishment of Jewish settlements during the British Mandate.

The Mandate began after the end of the First World War, and ended May 14, 1948, which was the date the British withdrew from Palestine. The same day Israel proclaimed its independence.

The bulk of the settlements in this part of the Negev, however, were established during the period from 1943 through 1946.

To understand why so many settlements were set up in such a relatively short period of time, we need to go back a little in history.

The Mandate also provided that
no person shall be excluded from Palestine on the sole ground of his religious belief, and that
none of the terms of the Mandate could be modified without the consent of the Council of the League of Nations.

Unfortunately for the Jews, things went downhill from there.

A series of Arab riots began after the mandate went into effect, and each time there was a period of rioting, the same things happened:
There was death, injury, and destruction of property
The British wondered how to prevent repetition
The British formed investigatory commissions
The Investigatory commissions issued White Papers
The White Papers contained recommendations to stop future problems
The Arabs began rioting again

A common thread seemed to run throughout the entire White Paper exercise. Almost every investigation showed that rioting was instigated by Arabs. And almost every investigation resulted in a White Paper that
restricted Jewish immigration to Palestine
restricted Jewish land acquisition
restricted Jewish use of land they already owned
This was even though Jews had purchased thousands of acres of land in the South. Nothing was stolen or appropriated. Everyone who sold land had deeds, or tax records, or records of the Ottoman land registry, the Tabu. And the sellers usually had more than one form of proof of official property ownership before Jews would buy the land.

There were more riots, which got progressively worse, from 1936 through 1939, and there were commissions and recommendations issued in 1937, 1938, and 1939. These recommendations progressed from removing the Negev from consideration as part of a future Jewish state, to an even smaller prospective Jewish state to be located only in the coastal plain, all the way to a recommendation that there not even be a Jewish state, but a single bi-national state governed “democratically” by its citizens. This was at a time when the Jewish population of Palestine was around one third of the total.

Why did the British so clearly violate the terms of the mandate?
The British were governed by both need and fear:
They needed to secure their control of the Suez Canal
They were afraid that Arabs would support the Germans and Italians

All these commissions and reports and recommendations boiled down to one key point: They served as a slap in the face, a true wakeup call to the Jewish leadership. Whereas the Jewish body politic was, and for years before had been severely fractured and tension-ridden, on this issue they came together and spoke with one voice. They knew that if these recommendations were allowed to stand, there would be no Jewish presence in the Negev, the size of the future Jewish state of their dreams would be reduced by more than half. Moreover, there was a strong likelihood that there may not ever be a Jewish state. The viability of the entire enterprise was in mortal danger!

Faced with these prospects the Jewish leadership began to plan, and to gather its resources.

Notwithstanding their prohibitions, the British did, in fact, allow a number of settlements to be established in the Negev, although most of them ended up in the Gaza sub-district.

Then, in 1943, the situation changed a bit. Although they continued to prohibit new Negev settlements, the British did allow the establishment of observation posts (in Hebrew, mitzpim) in this area, and there was a mitzpeh (a separate post), set up at Mitzpeh Gvulot, at Mitzpeh Revivim, and here, where we are sitting, at Mitzpeh Bet Eshel. We will be visiting all these mitzpim, and a number of settlements, as well.

The stated purpose of the mitzpim was to conduct scientific experiments and observations. They examined soils, temperature, humidity, plants, and water – notice that every one of these mitzpim was located on, or near a water source. In the desert, water is the source of life. Gvulot was near the Besor River, one of the only year-round streams in the country; Revivim was at the Revivim stream, one of the tributaries of the Besor, and here at Bet Eshel, the outpost was established near the junction of two rivers, the Be’er Sheva and the Hebron. More important from the standpoint of water, all the way back to Biblical times this place was well known as a place where wells could be dug with relative ease. This was because the water table in this area is very close to the surface, so this became a place where life could be sustained, and where Abraham could relax under his eshel tree, just you are relaxing under the eshel, now.

Back to 1943, it’s the middle of World War Two, and the mitzpim and a couple more settlements were set up in the Gaza district, all at a time that the British were very much occupied in other places. I’ve already told you about the open purposes of the mitzpim, but probably more important was the underlying purpose – which was to train an experienced corps of people who could begin settlements of their own.

The Jewish leadership is moving, slowly, slowly, toward the realization of the goal to overturn the effects of the recommendations of the White Papers. Studies are continuing, and Jews, although not too many of them, are here in the Negev.

Jewish leaders realize that this area could, indeed, become viable. In England and the United States, Zionists are vigorously pressing their case with every politician who could help them offset earlier British recommendations.

Then, in 1946, something happens to change the whole settlement enterprise in the Negev. All the planning and preparation, the months of hiding of people, supplies, and materials, pays off.

Picture this: It’s Motzei Shabbat, and it’s also Motzei Yom Kippur. People in Palestine go to sleep that evening, October 6, 1946, and when they wake up in the morning, there are ELEVEN new settlements in the South! Reality changes! New facts are on the ground.

By 1947, at least one more new settlement is established in the Negev, and more important, the First Negev Pipeline, built with 190 kilometers of surplus British pipe, is sending water from Kibbutz Nir Am South and East to settlements in the Negev. Almost 300 million gallons the first year of operation.

The British know that there really is nothing left to do except find a graceful way out of the mandate. In May of 1947 the United Nations Special Committee on Palestine (UNSCOP) is formed. The UNSCOP representatives go to Palestine and investigate the facts as they exist at that time.

UNSCOP comes here to the Negev. They see flourishing, growing, thriving settlements. They see Jews being trained in agriculture. They see Jews who are irrigating the desert and making it bloom. UNSCOP reports back to the United Nations, and on November 29, 1947, the UN votes, contrary to all the recommendations of all the British White Papers, to divide Palestine into an Arab state and a Jewish state, and to include the Negev as part of the Jewish state.

It is only because of these courageous pioneers, who braved the elements, the desert, and formidable adversaries, and who refused to accept the perfidy of the British, that you and I, as Jews, can sit here under the shade of these eshels, just like our forefathers, and offer hospitality to our guests and partake of the goodness of this land.
Posted by Rotarian Israeli Tour Guides at 1:16 PM