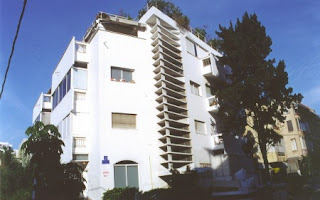 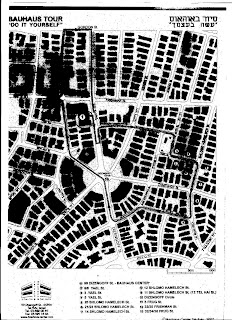 
Whether you call it Bauhaus or International Style architecture, Tel Aviv is still the only city in the world that houses such a large collection of buildings designed in this style. It evolved in Germany in the 1920's, came to an abrupt end (in Germany) with the Nazi's rise to power and continued to develop in the U.S. and elsewhere. In Tel Aviv of the 1930's, Bauhaus architecture flourished, as is evidenced by many of the wonderful buildings that line the city's streets. Since the initial publication of this issue, the "White City of Tel Aviv" has been designated by UNESCO as a World Heritage site.


Central Tel Aviv has the world's largest collection of Bauhaus style buildings. The International Modern Style of architecture appeared in Europe in the years immediately following World War One. Its greatest exponent was the Bauhaus School of Arts, Design and Architecture, founded by Walter Gropius in Weimar Germany in 1919. The Bauhaus School later moved to Berlin and was closed by the Nazis in 1933. Over the years many have come to regard the terms Bauhaus and International Modern Style as synonymous.


The rise of Nazism and successive waves of Jewish immigration to Palestine brought many new immigrants from Germany, including several prominent Bauhaus architects, to Tel Aviv in the 1930's. In Israel these architects had to adapt their style to different environmental, especially climatic, conditions. Tel Aviv's tremendous urban growth at this time provided them with ample work. The results can be seen through the approximately 4,000 Bauhaus style buildings that were built in Tel Aviv in the 1930's and 40's.

So what is Bauhaus Architecture?
Bauhaus style architecture favored functionality for the benefit of the residents over decoration. In building design, the organization of space took prominence over mass. Architects strove to optimize light and ventilation, an especially important challenge as they moved from central Europe to Middle East. Bauhaus buildings standout for neat flowing lines, both vertically and horizontally. Decorative elements were avoided. Construction favored the use of modern materials and relied on an internal shell rather than being supported by external walls. In Tel Aviv many Bauhaus buildings were built standing on pillars with dangling corners to provide for greater ventilation and shady areas outdoors.

Where to Find Bauhaus Style Buildings in Tel Aviv
Since there are roughly 4,000 Bauhaus style buildings in Tel Aviv, as you begin to notice their defining features, you will start to see a lot of them. Try the northern end of Rothschild Boulevard, especially on the east side of the street in the 80's. Personal favorites include 87 Rothschild Blvd and Beit Rabinsky at 1 Gilboa St. Other good areas for viewing Bauhaus style buildings include Dizengoff Square and nearby Beilinson, Ben Ami and Frug Streets, along with the area of Yael and Shlomo Hamelech Streets north of Dizengoff Sq. Additional good examples can be seen on Mazeh and Nachmani Streets off the middle of Rothschild Blvd.

Remember to bring your camera to capture these special buildings.

There are a number of characteristics to the Bauhaus/International Style of architecture:
1) It shuns ornamentation and favors functionality
2) Uses asymmetry and regularity versus symmetry
3) It grasps architecture in terms of space versus mass

Bauhaus architecture was concerned with the social aspects of design and with the creation of a new form of social housing for workers. This may be just another one of the reasons it was embraced in the newly evolving city of Tel-Aviv, at a time when socialist ideas were so prevalent. This style of architecture came about (in part) because of new engineering developments that allowed the walls to be built around steel or iron frames. This meant that walls no longer had to support the structure, but only enveloped it – from the outside.

Bauhaus buildings are usually cubic, favor right angles, (although some feature rounded corners and balconies); they have smooth facades and an open floor plan.

The Bauhaus buildings are all on the street and so they are accessible as a normal street.

1. Bauhaus Center, 99 Dizengoff (opens 10 AM week days) has a very good video on history of Tel Aviv with emphasis on architecture from Eclectic to Art Nouveau to International Style.

Other touring areas are:


Tel Aviv has the largest number of cooperative workers’ apartments in the country. The aim was to provide residents with as much equality in living quarters. These blocks of apartments, operated almost as self-contained units. Residents had a variety of services right in the buildings, including kindergarten, post office, convenience store, laundry etc. Additionally, a plot of land was set aside, so that residents could grow their own vegetables. Having a ‘connection to the land’ was viewed as extremely important. An example of such a cooperative unit can be seen at the corner of Frishman, Dov Hoz and Frug streets. This block of buildings also served as headquarters of the Haganah.

There are over 1500 International Style buildings in Tel Aviv, slated for preservation/restoration. Looking at some of the buildings already restored, one can only imagine how beautiful and modern the city must have looked in the 1930’s.

Some of the key elements of Bauhaus architecture had to be adapted to the local environment, primarily because of the climate. One of the key elements of the International Style in Europe was a large window. However, in a hot climate – large windows that let great amounts of light shine into the rooms – do not make sense. Locally, glass was used sparingly and long, narrow, horizontal windows are visible on many of the Bauhaus buildings in Tel Aviv. On some buildings, you can also see long narrow balconies, which in many cases have now been enclosed. This was an adaptation of the long narrow windows.

The horizontal ‘strip window’ was a signature characteristic of Le Corbusier. A number of local architects worked in Le Corbusier’s office in Paris and were greatly influenced by his style.

Another element used by Le Corbusier was stilt-type columns (pilotis), which raised the buildings off street level thereby creating room for a green garden area while providing greater airflow.

The first building built in this manner in Tel Aviv, was Beit Engel. It was built in 1933, by Zeev Rechter, and is located at 84 Rothschild Boulevard, and the corner of Ma’zeh Street. Rothschild Boulevard is an excellent area to see a great variety of Bauhaus buildings (although quite a few are in dire need of restoration). If you go to see the Engel building today you will notice that the ‘open’ area created by the stilt columns has been enclosed. Rechter fought for two years to get approval to build on these stilt columns. This type of building became quite common, in Tel Aviv and the surrounding cities, although by the 1940’s fewer buildings were being built in this manner in Tel Aviv.

Another of the local features of the Bauhaus buildings, are the flat roofs, as opposed to the typical shingled and slanted roofs, prevalent in the European buidlings. The roofs served all of a buidlings’ residents. While roofs in most cases did not feature gardens, (as envisioned by Le Corbusier), they were a place where social events were held and where the laundry room was often located as well.

The local building technology of the time was not advanced. Reinforced concrete was first used (in Tel Aviv) in 1912. Later it became widely used, because it was easy to work with and did not require skilled workers.

Bauhaus architecture became common in Tel Aviv of the 1930’s for a variety of reasons. There was a strong tendency toward modernization. Architects, who worked locally, had strong ties to the European architectural developments of the day. There was also a need to build cheaply and quickly because of the growing metropolis.

Tel Aviv is the only city in the world, built mostly, in the International Style. In fact, over the years a kind of reactionary ‘anti-Bauhaus’ sentiment, developed.

Saving and restoring many of the city’s wonderful old buildings is fraught with legal and economic constraints that often make conservation, less than desirable for the building’s owners. One can only hope that the coming years will bring solutions that will enable the preservation of more of Tel Aviv’s Bauhaus architecture.

The links are to Artlog.co.il where you can find much more details on each house and the architects

On Monday,June 7/2/2003 the UNESCO declared the inner- city of Tel-Aviv a WORLD HERITAGE SITE,saving the 4,500 Bauhaus-buildings(and the buildings designed from 1909)for their destruction.

It is proper to thank a few people for their never ending fight for the survival of Historic buildings in Tel-Aviv.
First of all:]

Dr.MICHAEL LEVIN
It was Dr.Levin who with his exhibition " THE WHITE CITY"(1984) opened the eyes of the inhabitants of Tel-Aviv about their BAUHAUS buildings. In 1994 he cooperated in the INTERNATIONAL STYLE CONFERENCE( May22-28) in Tel-Aviv.
Posted by Rotarian Israeli Tour Guides at 10:56 PM